Biofiltration for Emission and Odour Control

Biofiltration is the process of using microorganisms to remove and oxidise volatile organic compounds and toxic gases. Air is directed through an active media bed, known as the biomass. Microorganisms in the biomass react with the humidified VOC particles. The media bed is kept to ideal moist conditions through constant irrigation. Treated air is then released from the unit through a vent stack, with more than 95% of hazardous gases removed.

The first biofilters used were the open bed or soil bed models. There were a number of design problems with these early configurations. They had limited media options, were high maintenance and therefore performed poorly. Soil bed biofilters did improve with development over time but continued to be constrained by their impractical design.

Fortunately, new developments in technology have dramatically improved biofilter effectiveness across the industry. However, only Cleanawater's FiltaOdor™ biofilters have comprehensively addressed all previous limitations of the early designs in regards to the following criteria:

There is greater control over filter bed media moisture levels in FiltaOdor™ units. A joint humidifier and irrigation system is used to keep humidification at optimal levels; excess moisture can be captured and recirculated. The media is also protected from variable weather conditions.

In the old systems, basic sprinkler heads were used for irrigation without any automated control of moisture levels. However, FiltaOdor™ systems use a specially designed "wobbler" sprayer that ensures even coverage of the filter bed. Saturation is avoided through appropriate drainage so that the right moisture levels are maintained.

The changes in filter bed media from bark and woodchip to an organic fibre and minerals mixture has addressed many potential problems. For example, bark and woodchip are highly biodegradable, which means they could often become compacted and therefore restrict the flow of untreated air. Weeds growing in soil filter beds were also a problem. In Cleanawater's FiltaOdor™ filters, these problems have been eliminated by introducing airflow through an unrestricted plenum rather than pipes. The new organic fibre and mineral media formulations work together to ensure even diffusion and correct moisture levels, with low biodegradability to prevent blockages and ensure extended media life - in excess of 10 years. 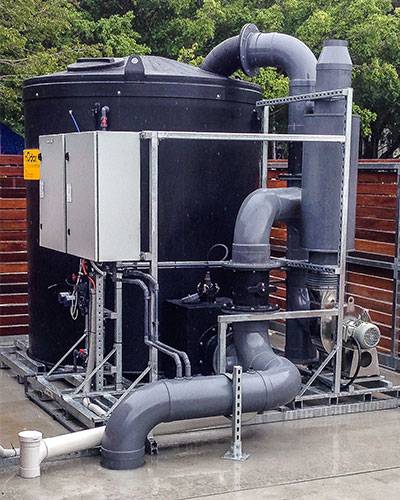 The media in a biofilter must not be in direct contact with the diffuser pipes as this causes media particles to block the pipes. Geofabrics were once used to stop clogging, but then this fabric restricted airflow through the system. In Cleanawater's FiltaOdor™ series, a cored deck with specific aperture size and number makes sure that airflow is unobstructed and as previously stated, an open plenum is used in lieu of diffuser pipes.

In FiltaOdor™ systems, the inlet and exhaust ducting are designed for optimal airflow rate, while the plenum allows for even distribution of untreated air.

While open bed filters were always at the mercy of temperature and other weather fluctuations, the enclosed vessel of a FiltaOdor™ unit protects against temperature changes and allows for a more consistent moisture level. The contained unit also prevents weed and vermin problems, while ensuring minimal negative impact through weather changes.

Want to take advantage of the superior technology in our FiltaOdor™ systems? Call Cleanawater today on 1800 353 788 to find out more.