Industries such as manufacturing, mining, automotive, oil and gas produce large amounts of oily water. If this water is discarded without any treatment, it eventually joins rivers and oceans and is a serious threat to animals and vegetation.

A large scale example of the toxicity of oil is the 2010 Gulf of Mexico oil spill. Over the course of this disaster 11 people and over 750 animals were killed, and criminal charges and fines were laid for those found responsible.

Water Regulatory Authorities determine how businesses are allowed to release trade waste water into local sewerage. For example, a business located in Geelong is subject to the regulation imposed by Barwon Water, whilst a business in Box Hill is subject to Yarra Valley water regulations.

To treat oily water in accordance to these regulations, an oil water separator is necessary. A cheap and efficient way to treat oily water and ensure your business is following the law is a Vertical Gravity Separator (VGS).

A VGS oil separator works by forcing the oil in water to collect and form bigger droplets. These oil droplets will then float to the top of the tank to be separated.

A VGS is a cost effective, compact and efficient solution to water and oil separation.

A medium sized workshop produces oily water during the daily wash down of vehicles and equipment. The business is looking for a Water Authority compliant system that is small, low cost and low maintenance.

Cleanawater's VGS separator is ideal as it is compact, cost effective, low maintenance and ensures the business is treating oily water in accordance with the local Water Authority's regulation.

A refueling facility regularly produces oily water and is unsure how to properly dispose of this water. The facility wants to ensure Water Authority compliance but has limited space to install the separator. They would also like to reuse this water to wash down trucks and equipment to reduce their mains water costs.

A VGS accelerates the naturally occurring separation of oil and sediments from water. When untreated water settles in a tank, oil will float to the top and solids will sink to the bottom.

VGS oil separators speed up this natural process by providing a large surface area where oil droplets can join together and form larger droplets. These larger oil droplets form layers of oil that easily float to the top of the tank making the separation process faster and more effective.

A VGS forces the formation of larger oil droplets using a series of cones inside the tank. These cones are made of a material that actively attracts oil droplets and provide a surface for oil droplets to merge.

This process increases the speed of separating oil and water, as well as allowing a constant flow of oily water to be treated.

A Technical Guide to VGS operation 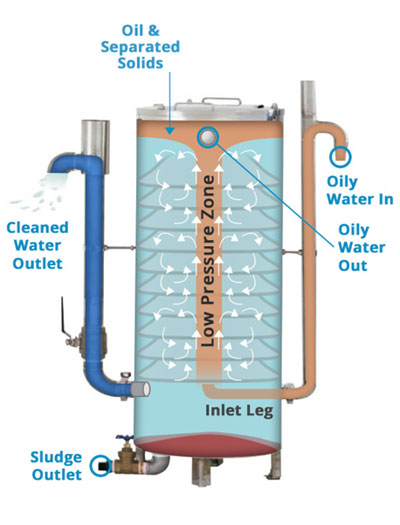 The way oily water is fed into the tank is crucial for the successful operation of a VGS. When oily water is pumped using a high speed pump such as centrifugal or submersible pumps, emulsification can occur. As the pump moves water at high speeds, it disrupts the chemical bond of oil and water particles, which can lead to the two mixing and becoming an emulsion.

An oil and water emulsion is difficult to separate therefore an appropriate low speed pump must be used. These are known as non-emulsifying pumps. Non-emulsifying pumps gently transport water without creating turbulence or excessively disrupting the fluid.

Two of the most cost effective non-emulsifying pumps are Diaphragm pumps and Progressive Cavity Pumps. These pumps operate at low speed and are able to handle thick fluids and large solid sediment in the fluid. 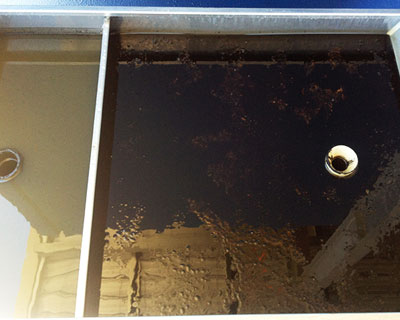 Fast and adequate oil and water separation is possible thanks to a truncated conical spiral pack (SPAK). A SPAK is a series of filtering cones along the tank that provide a surface where oil can adhere, and water is forced to cascade down the tank.

The SPAK is made out of polypropylene material (PP) which has oleophilic, or ‘oil attracting’, properties. The conical shape of the SPAK provides the largest surface area possible for oil droplets to combine. The larger the oil droplets, the faster they will float to the top of the tank.

Oily water enters the VGS through a bottom inlet leg and flows to the top of the tank. As oily water is released into the tank, the SPAK begins to attract oil. For water to sink to the bottom of the tank, it must travel down the slope of the cones and cascade down onto the next filter.

This forced movement down the gradient of the filter allows small and less buoyant oil droplets a chance to adhere to the cones. If the surface area of the filtering mean was smaller, these small droplets would be carried away with “clean” water, resulting in a higher concentration of oil in the treated water.

Sediment particles that are heavier than water will sink to the bottom of the tank and form sludge that can be easily drained through an outlet pipe.

Clean water is discharged through a hose located slightly below half way of the tank and oil exits from the top of the oil water separator tank.

A VGS is a compact and efficient solution to oil water separation for industrial and commercial applications.

Water treated by a VGS is Water Authority compliant and can be safely discharged to a sewer, leach drain or in some circumstances, to stormwater.

VGSs are a fantastic technology to reduce costly water disposal fees. VGSs can also combine with other Cleanawater systems so that treated water can be recycled for irrigation, wash down bays, or used as an alternative to mains water.

Call Cleanawater on 1800 353 788 to discuss how to get your business water authority compliant and reduce your water disposal fees.

There are many ways to remove oil from water. Find out how Hydrocyclone Oil Separators work, and whether it is ideal for your water treatment needs ... Read more

Need to get water authority compliant? Coalescing Oil Separators are a functional solution to water treatment. Find out how they work here ... Read more